A more detailed analysis of the occupation and use of land in the country, produced by MapBiomas, shows that 66.3% of native vegetation is already degraded

The growth of the area occupied by agricultural activities in Brazil between 1985 and 2020 was 44.6%. Together, agriculture and cattle raising gained 85 million hectares in the period. These activities have grown in five of the six Brazilian biomes, with the exception of the Atlantic Forest. These are some of the results of the MapBiomas Collection 6, released this Friday, August 27th.

Collection 6 brings novelties in the study of land use and land cover in the Brazilian territory. Satellite imagery with surface reflectance - a new tool that helps make the data more accurate, was used to analyze individual images. The new monitoring also includes new Agriculture classes: rice, coffee and citrus; further detailing the type of crop employed on the land.

Collection 6 shows that, in the last 36 years, the soy and sugarcane planting area reached the same extent as the entire rural formation in Brazil. To give you an idea, soy plantations are equivalent to a Maranhão state and sugarcane occupies twice the urbanized area of ​​the country. The main land use in Brazil continues to be forests: 59.7%. But, this percentage is mostly concentrated in the Amazon region. In other words, excluding the Amazon, the picture of Brazil is quite different. In Pampa, only 12.5% ​​of the territory is forest. Almost half (47.8%) is occupied by agriculture. In the Atlantic Forest, the agricultural area is even larger, occupying two thirds (66.7%) of the biome. Cerrado (45%) and Caatinga (37.4%) have the third and fourth largest occupation by agricultural activities.

The study shows, in a more detailed analysis of the occupation and use of land in Brazil, that the 66.3% of native vegetation does not necessarily correspond to preserved areas. “A part of this native vegetation is already degraded or has already been deforested and is in regeneration, qualifying the state of degradation is one of the current focuses of MapBiomas”, comments Tasso Azevedo, general coordinator of MapBiomas. Of the 27 states in the federation, 24 lost native vegetation. The champions are Rondônia (-28%), Mato Grosso (-24%) and Maranhão (-16%).

On the other hand, indigenous territories already demarcated or awaiting demarcation were the ones that most preserved their original characteristics. Less than 1% of deforestation in Brazil between 1985 and 2020 took place on indigenous lands. “If we want rain to supply the reservoirs that provide energy and drinking water for consumers, industry and agribusiness, we need to preserve the Amazon rainforest. And the satellite images leave no doubt: those who do this are the indigenous people”, concludes Tasso.

About MapBiomas: multi-institutional initiative involving universities, NGOs and technology companies, focused on monitoring changes in land cover and land use in Brazil. This platform is today the most complete, up-to-date and detailed spatial database of land use in a country available in the world. All data, maps, methods and codes of MapBiomas are made available publicly and free of charge on the initiative's website: mapbiomas.org 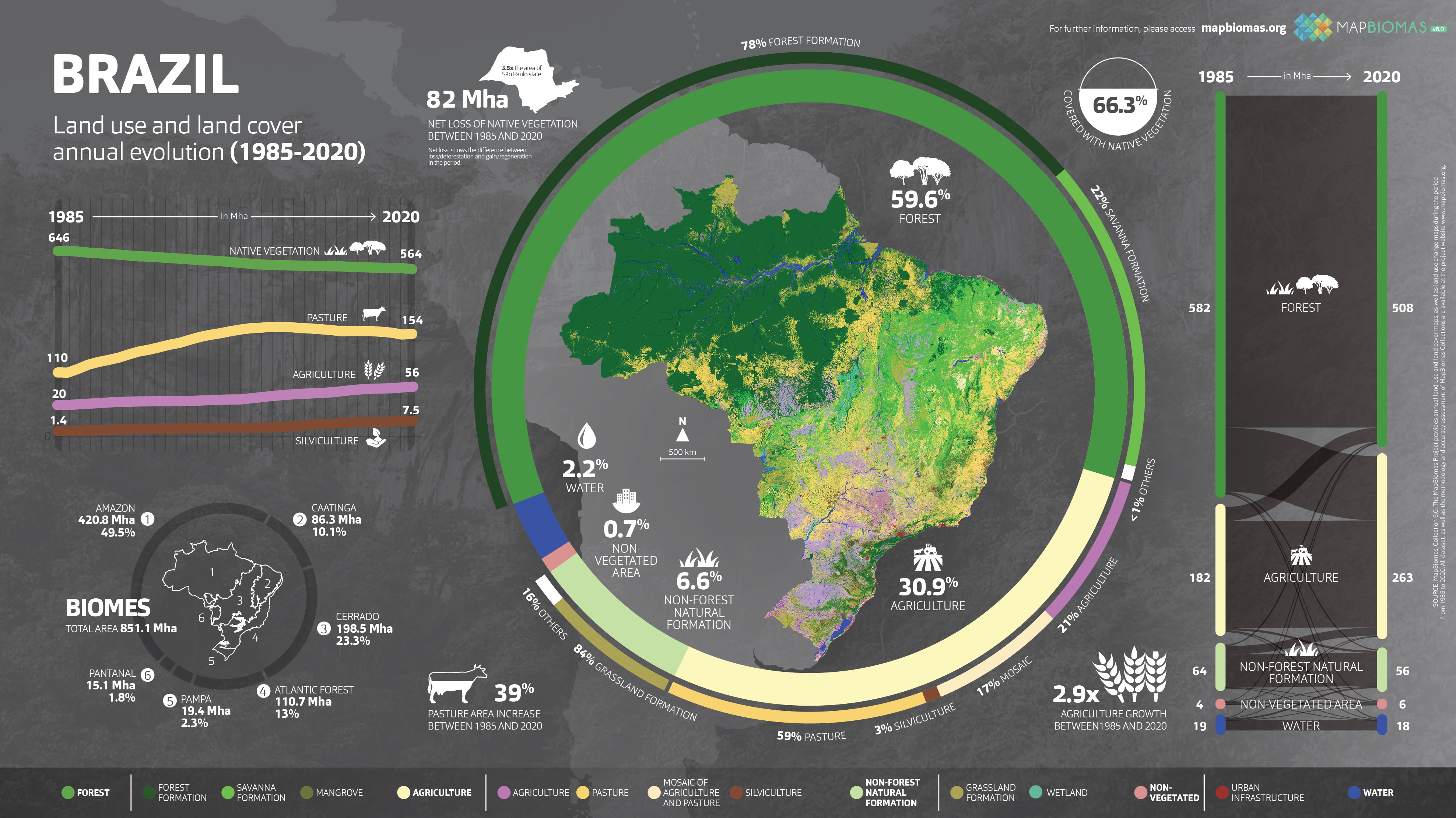