Here we present a summary of the method developed and applied in the Fire Scars Mapping of Brazil (1985 - 2020) collection 1.

For more details access the ATBD (Algorithm Theoretical Basis Document) in this link.

All fire scar mapping of Brazil was based in Landsat satellite image mosaics with 30 meters spatial resolution. The mapping period was from 1985 to 2020, with monthly and annual data of fire scars covering the whole Brazilian territory.

The entire process was done collaboratively among institutions of the MapBiomas' project and with artificial intelligence through the use of machine learning algorithms on the Google Earth Engine plataform and Google Cloud Storage, which offer immense processing capacity in the cloud.

The work was organized by biomes and regions, with sample collection in burned and unburned areas for algorithm training by regions, in addition to the use of reference maps, such as burned areas from the MODIS product (MCD64A1 - https://lpdaac.usgs.gov/products/mcd64a1v006/) of 500 m spatial resolution and data from INPE (https://queimadas.dgi.inpe.br/). 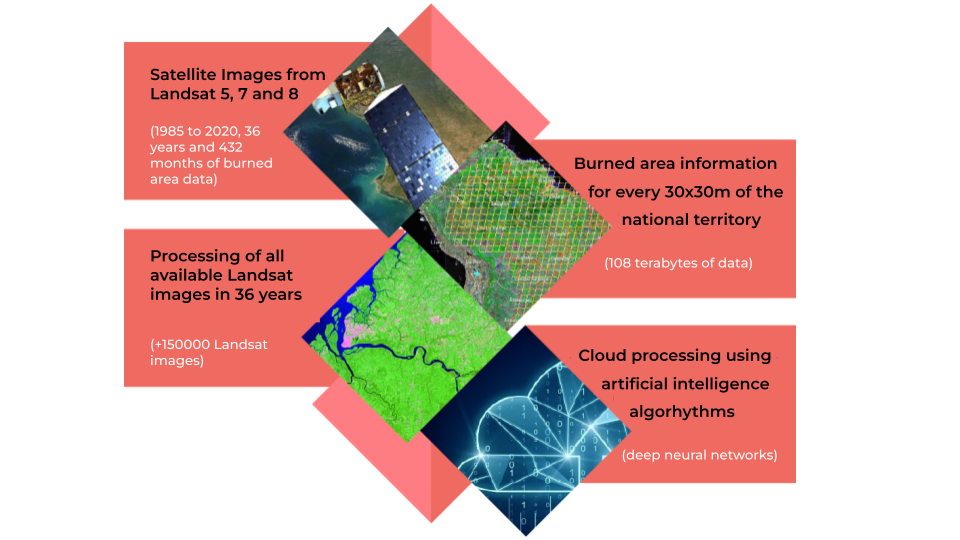 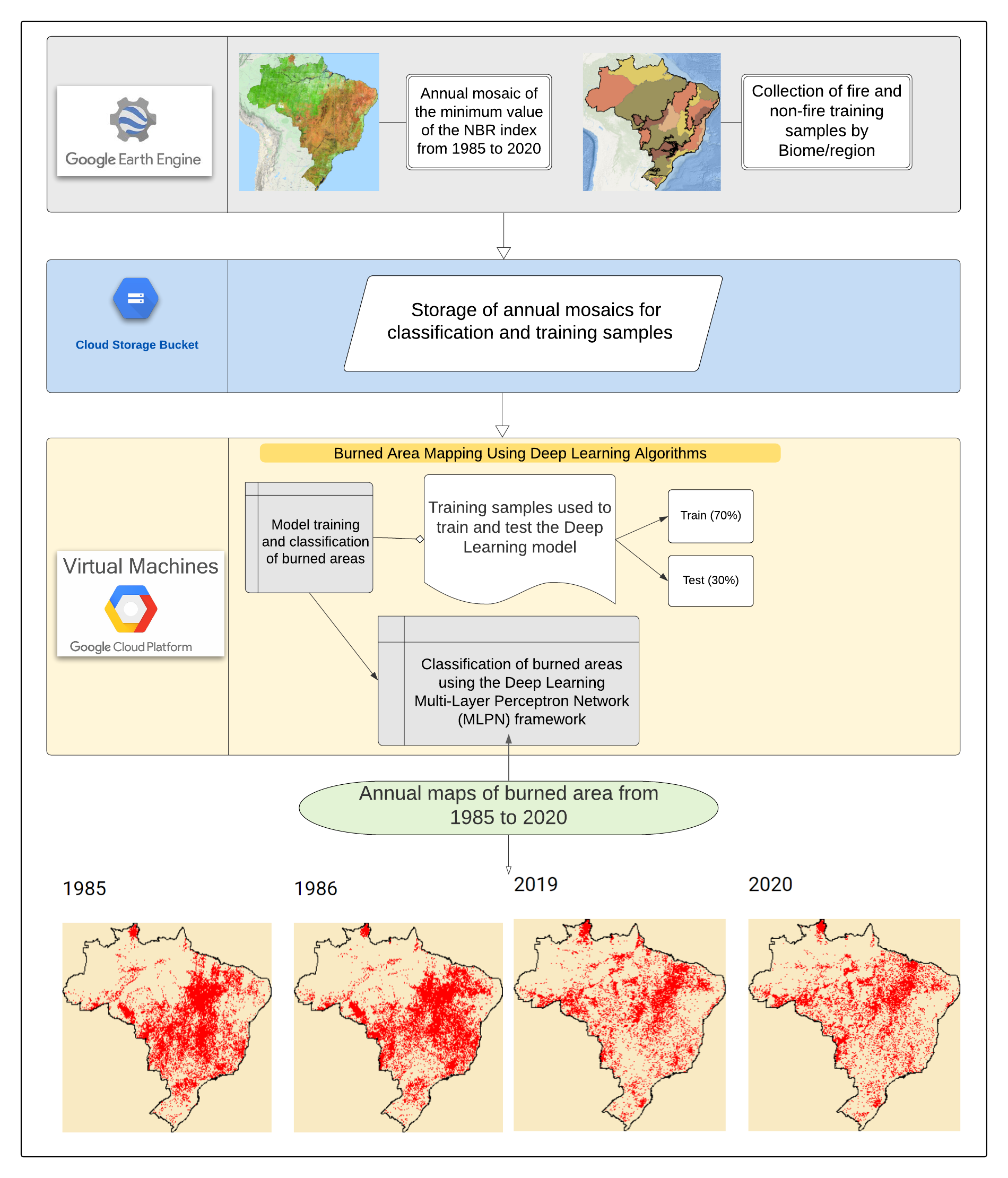 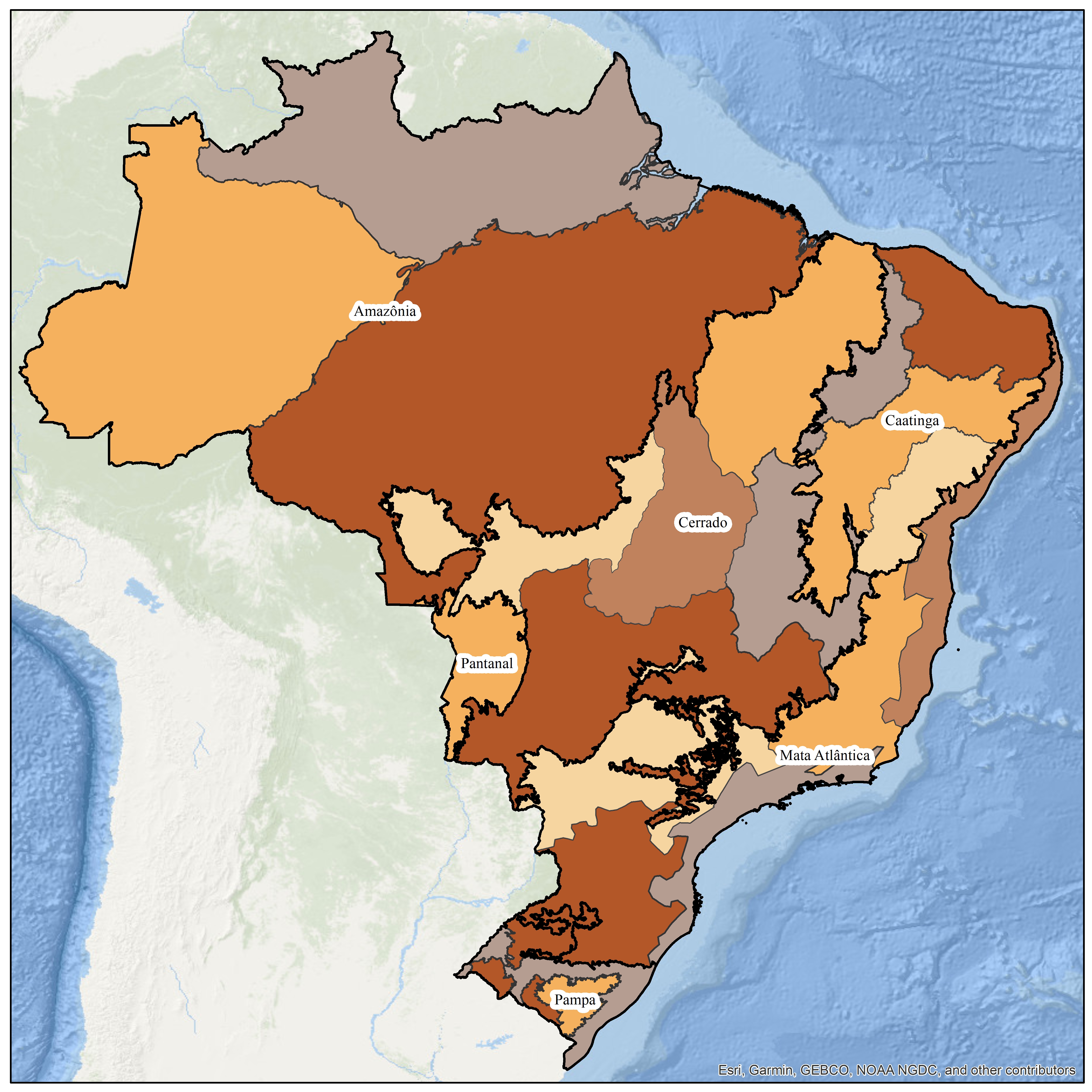 This step consists of collecting training sample polygons of burned and unburned areas in the annual Landsat mosaics for each biome region and sensor (Landsat 05/Landsat 07 and Landsat 08).
Thus, we obtained a sample set per sensor and for the 21 regions of Brazil, to be used for training the classification model.

The classification model used was the Deep Neural Network, which consists of computer models based on mathematical calculations capable of machine learning and visual pattern recognition.
The burnt area mapping algorithm consisted of two phases: training and prediction. Based on the training samples of burned and unburned areas, the following spectral bands were used as input for the burned area classification model: red (RED - 0.65 µm), near infrared (NIR - 0.86 µm) and shortwave infrared (SWIR 1 - 1.6 µm and SWIR 2 - 2.2 µm). In addition to these selected spectral bands, Landsat bands 2 to 7 and the NDVI (Normalized Difference Vegetation Index), NBR (Normalized Burning Index) and Delta NBR indices were tested. These Landsat spectral bands were chosen based on their sensitivity to fire events. The training data input was split into two sets: 70% of the samples used for training and 30% for testing.

After training and testing the model, the classification was applied with biweekly Landsat images for the entire analysis period (1985 to 2019). A spatial filter was applied to remove noise and fill small empty gaps: areas smaller or equal to 1.4 hectares (16 pixels) were removed, and empty gaps smaller or equal to 5.8 ha (64 pixels) were filled as burned areas.
After evaluation of the classification results, post classification filters were also applied removing pixels that were in the following land cover and land use classes from MapBiomas Collection 6 in the biomes:

Since Deep Learning methods require large computational processing, implementations were based on graphics processing units (GPUs) and specialized hardware components to perform parallel arithmetic operations. Access to the GPUs in a virtual machine environment was implemented on the Google Cloud Platform (https://console.cloud.google.com), a set of cloud computing services provided by Google.
To obtain the information of the month in which the fire scar was mapped, postclassification processing was performed to retrieve the information of the date of the pixel that was burned from the date of the pixel in which the annual mosaic was constructed from the minimum NBR.

Burn scar classification evaluations were performed with monthly Landsat images, with visual inspection, statistics, and relationship with land use and land cover, as well as comparison with reference maps (MODIS and INPE).

The validation of the burned area mappings was carried out by biome, considering the years 2007, 2011 and 2019. Each of the biomes was divided into areas of 2 km by 2 km, spatially integrated with burned area data from FIRMS (Fire Information for Resource Management System - https://firms.modaps.eosdis.nasa.gov/), for the same years, where the sampling units were grouped into 4 categories: no fire occurrence, with up to 32% fire occurrence, with fire occurrence between 32% and 70%, and with fire occurrence above 70%.
Then, validation sampling units were randomly selected for each category, year, and biome.

For each selected sampling unit, a minimum annual Landsat NBR image was extracted. Next, automatic segmentation of all the images of the selected sampling units was performed. The segments were interpreted in order to make explicit which ones had occurrence of fires. After the interpretation of all segments, the centroids of the segments were obtained (validation points)
The validation points (fire and non-fire) were spatially integrated with the MapBiomas Fire mappings, making it possible to evaluate the qualities of the mappings and to obtain the classification accuracy.