Here we present a summary of the method developed and applied in the Brazilian Fire Monitor (starting in 2019).
For more methodological details access the ATBD (Algorithm Theory Base Document) at this LINK.

The Fire Monitor is the first version of the monthly mapping of fire scars for Brazil, covering the period from 2019 onwards, based on monthly mosaics of Sentinel 2 multispectral images with spatial resolution of 10. The entire process was carried out collaboratively between the MapBiomas network institutions and using machine learning algorithms (deep learning) through the Google Earth Engine platform and Google Cloud Storage, which offer immense computational and cloud processing capacity.
The classification was organized by biomes and regions, collecting samples of burned and unburned areas to train the algorithm by regions. The method used was based on Collection 1, the respective paper published by Alencar et al. 2022.

The satellite image processing and classification routines used to map the monthly burned areas in the Brazilian territory followed six steps, based on the method according to Alencar et al. 2022, which includes: (1) definition of the classification regions by biome, (2) construction of monthly Sentinel image quality mosaics, (3) collection of training samples containing spectral signatures of burned and unburned areas, (4) training and development of the deep neural network prediction model (DNN-Deep Neural Network), (5) use of post-classification routines with masks and spatial filters, and (6) evaluation of the results.
The diagram below illustrates the main steps and platforms used to classify burned areas in Brazilian biomes on a monthly basis. 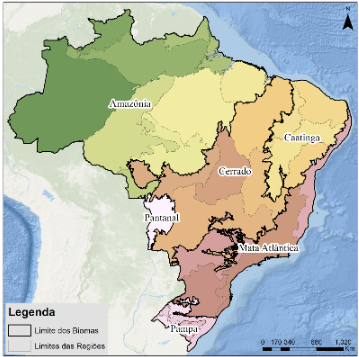 Monthly fire scar classification was performed using Sentinel 2 monthly mosaics. To remove cloud noise a Sentinel 2 cloud probability collection ("COPERNICUS/S2_CLOUD_PROBABILITY"), created with the Sentinel2-cloud-detector library (using LightGBM), was used, where higher values are more likely to be clouds or highly reflective surfaces.
To create the monthly mosaics, the composition of all available images of the month into a single image was performed, using the minimum spectral index NBR (Normalized Burn Ratio. For the monthly fire scars classification, a potential monthly area for mapping was also defined, from a 5 km buffer around the hotspots of all satellites available by INPE.

This step consists of collecting training sample polygons of burned and unburned areas in the Sentinel mosaics for each biome region, to be used for training the classification model

The classification model used was the Deep Neural Network (DNN), which consists of computational models based on mathematical calculations capable of deep learning and visual pattern recognition. The structure used was the Multi-Layer Perceptron Network (MLPN). For this DNN model the input layers were the spectral bands RED, NIR, SWIR1 and SWIR2, and the output layers were the burned and unburned classes.

After evaluating the classification results, post-classification masks were also applied to reduce possible commission errors. Rules were defined per biome to remove pixels that classified as burned in the distinct land cover and land use classes of MapBiomas Collection 7.0, as follows:

Assessments of the classification of monthly burn scars were performed with Sentinel images, with visual inspection, statistics, and relationship with MapBiomas land cover and land use data, and comparison with reference maps (MODIS, INPE, FIRMS, FireCCi, MapBiomas Collection 1).

The validation of the burnt area mappings was carried out by biome, considering the years 2007, 2011 and 2019. Each of the biomes was divided into areas of 2 km by 2 km, spatially integrated with the data of burnt areas from the FIRMS (Fire Information for Resource Management System - https://firms.modaps.eosdis.nasa.gov/), for the same years, where the sampling units were grouped into 4 categories: without fire occurrence, with up to 32% fire occurrence, with occurrence of fire between 32% and 70% and with occurrence of fire above 70%.

Then, the validation sampling units for each category, year and biome were randomly selected.

For each selected sampling unit, a Landsat image of minimum annual NBR was extracted. Then, automatic segmentation of all images from the selected sampling units was performed. The segments were interpreted in order to clarify which had the occurrence of fires. After the interpretation of all segments, their centroids were obtained (validation points)

The validation points (fire and non-fire) were spatially integrated with the MapBiomas Fogo mappings, making it possible to assess the qualities of the mappings and obtain the accuracy of the classification.