Hub for migratory birds, Pampa is the Brazilian biome that loses the most natural vegetation

The Pampa was the biome that lost the most native vegetation in the last 36 years in proportion to its total area, according to the latest data from MapBiomas obtained from the analysis of satellite images between 1985 and 2020. The 21.4% decrease registered between 1985 and 2020 places Brazil's second smallest biome ahead of Cerrado (-19.8%), Pantanal (-12.3%) and Amazon (-11.6%). As the Pampa functions as a "hub" to which various national and international migration routes converge, with destinations that include North America, southern South America and the North and Central-West regions of Brazil and northern Argentina, conservation of the Pampa's natural landscapes is crucial for multiple migratory species.

The Pampa biome, especially in its eastern portion, is considered a region of international relevance for several species of migratory birds. The existence of a mosaic of natural ecosystems including coastal lagoons, beaches, dunes, fields, restinga forests, and marshy areas attracts a remarkable concentration of birds in different seasons of the year, in search of food or breeding sites.

Nearctic migrants, species that breed in the northern hemisphere (Canada and the United States), fly to the Pampa in the summer in search of food. More than a dozen species are summer visitors, including the batuíras and the blowpipes, also known as beach birds, the batuiruçu (Pluvialis dominica), the yellowlegged curlew (Tringa flavipes), the melanoleuca curlew (Tringa melanoleuca), and the ringed curlew (Tryngites subruficollis).

The southern migratory species fly to the Pampa, where they stay only in the fall and winter. They leave from Patagonia, southern Chile, Tierra del Fuego and the Malvinas Islands for the Pampas in the winter, thus escaping the rigors of the austral winter. Among these species are the red-breasted batuíra (Charadrius modestus), the sandpiper (Cinclodes fuscus), the colegial (Lessonia rufa), and the Chilean tern (Tachycineta meyeni).

Other species are summer residents and temporarily leave the Pampa with the arrival of the cold months for various destinations. Many leave for northern South America and Central America, such as the swallows (Progne tapera and P. chalybea), the scissors (Tyrannus savana), and the suiriri (T. melancholicus). Others migrate in an east-west direction to the Argentine provinces of Santa Fe, Entre Ríos, and Corrientes. Some waterbirds migrate from the Pampa to the Pantanal, including the American waterbird (Mycteria americana), the spoonbill (Platalea ajaja), the red-legged hawk (Rostrhamus sociabilis), and the ruddy duck (Sarkidiornis melanotos).

The advance of anthropic use over the natural vegetation of the Pampa has accentuated in the last decade, when it was also possible to notice the beginning of a change in the economic profile of land use. "The substitution of the grassland formation for agriculture favors the loss of biodiversity and the release of carbon into the atmosphere, contributing to the greenhouse effect. But it is also a deviation from a natural economic vocation of the Pampa," warns Heinrich Hasenack, coordinator of the mapping of the Pampa.  "Unlike the Amazon or the Cerrado, where it is necessary to deforest in order to raise cattle, in the Pampa the native vegetation is a natural pasture, which allows cattle farming to develop while preserving the landscape," he explains. Research results show that proper management practices allow for an economic return similar to that of grain cultivation, with the advantage of preserving biodiversity and ecosystem services.

The Pampa has many grassland species per square meter, even when occupied by cattle, favoring the conservation of biodiversity and stored carbon. Although agriculture, in general, has excellent productivity, in some circumstances it ends up being introduced in areas with lesser suitability than cattle raising. Another worrying fact is that the Pampa has the lowest proportion of protected areas among all Brazilian biomes, with only 3% of the territory protected. Of which, if we discount the Environmental Protection Areas, a category with a lower degree of protection, this percentage drops to 0.6%. There are regions of the Pampa that are already excessively uncharacterized, to the point of jeopardizing the very capacity for ecological restoration with the genetic variants typical of these regions.

"Despite being part of the gaucho tradition, in the history of the occupation of the biome, and being an activity that, in the Pampa, is more aligned with the challenges of the 21st century of preserving biodiversity and reducing carbon emissions, cattle raising on native fields is losing space to agriculture, especially soybeans," explains Hasenack.

The advance of agriculture over native vegetation can be noticed throughout the biome, but was more pronounced in the regions of the Western Border, the Middle Plateau/Missions, Coastal Zone and eastern Campanha. The five municipalities that lost the most natural vegetation in the last 36 years were São Gabriel, Alegrete, Tupanciretã, Dom Pedrito and Bagé.

The results of the mapping of the biome also bring unprecedented data on fires and water surface. In the Pampa, unlike the other biomes, fires are negligible, with an annual average of 92.5 km2. Several factors contribute to explain the low quantity of fires in the Pampa, such as the absence of a dry season, the low accumulation of biomass in the vegetation due to grazing activities, and the fact that fire is not culturally used as a management practice in rural areas.

The water surface dynamics between 1985 and 2020 show a stable trend over the 36 years mapped. Almost 10% of the Pampa is occupied by water: with 1.8 million hectares in 2020. Most of this area is concentrated in the coastal zone, characterized by the presence of numerous lagoons, with the Patos Lagoon, Mirim Lagoon and Mangueira Lagoon storing 81% of the total water surface area of the Pampa biome. While in the central and eastern portions of the biome several locations were detected with a reduction in the available water surface.

A multi-institutional initiative that processes satellite images with artificial intelligence and high resolution technology in a collaborative network of experts, universities, NGOs, institutions and technology companies to create historical series and map land use and land cover in Brazil. UFRGS, in collaboration with GeoKarten, is the institution responsible for mapping the native vegetation in the Pampa biome within the MapBiomas network.

Access the main highlights of Collection 6 from the Pampa biome. 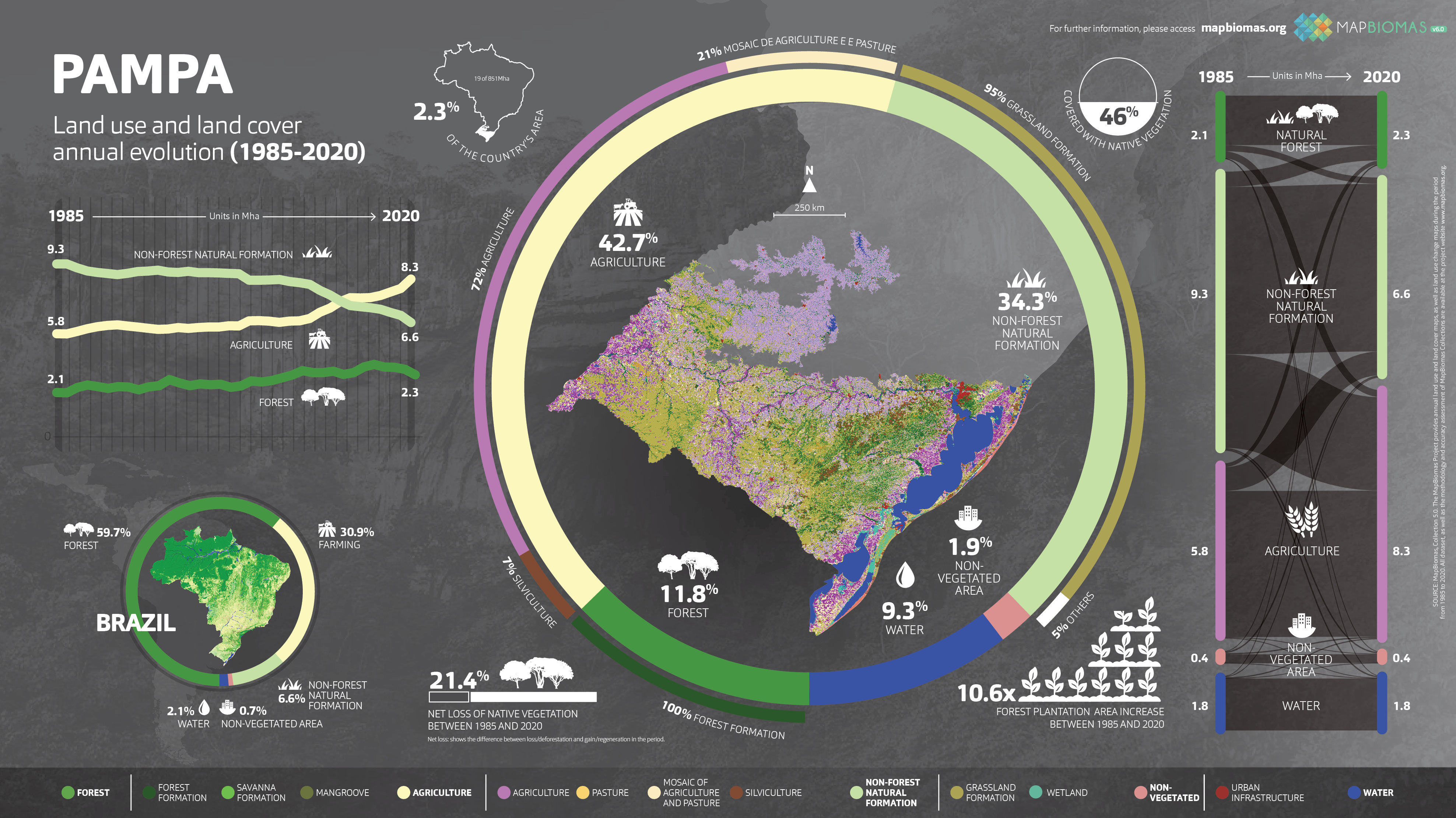 How the presentation of the Pampa data went: