Deforestation, fires and shrinking water surface increase the risk of desertification of the Caatinga

Changes in land cover over the last three decades are aggravating the risk of desertification of parts of the Caatinga. This is one of the conclusions of the MapBiomas analysis made from satellite images of the region between the years 1985 and 2020. In this period, 112 Caatinga municipalities (9%) classified as Areas Susceptible to Desertification (ASD) with Very Severe and Severe status had a loss of 0.3 million hectares of native vegetation. This represents about 3% of all native vegetation lost between 1985-2020 in the biome. Of this total, 0.28 million hectares were lost in 45 Paraíba municipalities classified as DSA.

At the same time, there was a decrease of 8.27% (-79,346 ha) in water surface. Overall, the Caatinga has become drier over the past 36 years. In addition to the reduction in total water surface area, there was also a 40% retraction in natural water between 1985 and 2020. This category, which encompasses free-flowing streams, accounted for less than a third (27.48%) of the Caatinga's water surface in 2020. Most of it was retained in hydroelectric dams (42.69%) or reservoirs (29.61%). In the mapped historical series, the smallest water surface area (629,483 hectares) was recorded as recently as 2017. The average water surface area mapped in the 36 years analyzed is 922,000 hectares.

The shrinkage of water surface occurred concurrently with the loss of 10% of natural areas (-5.9 million hectares). All hydrographic regions had a reduction in natural vegetation cover between the years 1985-2020. The Northeast Atlantic region showed the greatest reduction in terms of area with a loss of 3 Mha. In percentage terms, the East Atlantic region leads the losses with 19.52%, followed by Northeast Atlantic (-13.40%) and São Francisco (-8.87%). Of the 10 municipalities that lost the most natural vegetation in Caatinga between 1985 and 2020, eight are in Bahia.

Among the factors that cause the loss of native vegetation, the advance of farming and cattle raising activities stands out. Between 1985 and 2020 more than 10 million hectares of savannah and forest formations were converted into activities associated with agriculture and cattle ranching. Another 1.26 million hectares of non-forest vegetation were converted for the same use in the period. In total, agriculture and cattle ranching advanced over 11.26 million hectares of Caatinga and became responsible for 35.2% of the biome's area in 2020.  The total native Caatinga vegetation (i.e. the sum of the areas occupied by savannah, field and forest) occupied 63% of the biome, accounting for 9.8% of Brazil's native vegetation.

MapBiomas is a multi-institutional initiative that brings together universities, NGOs and technology companies that have come together to contribute to the understanding of the transformations of the Brazilian territory through the annual mapping of land use and land cover in Brazil. In August 2021, Collection 6 of MapBiomas was published with maps of land cover and land use in Brazil from 1985 to 2020. The tool developed by MapBiomas for all its initiatives provides information generated at a spatial resolution of 30 meters. The data is processed using automatic classification algorithms by means of information in the Google Earth Engine cloud. http://mapbiomas.org/

Check out the main highlights of Caatinga here. 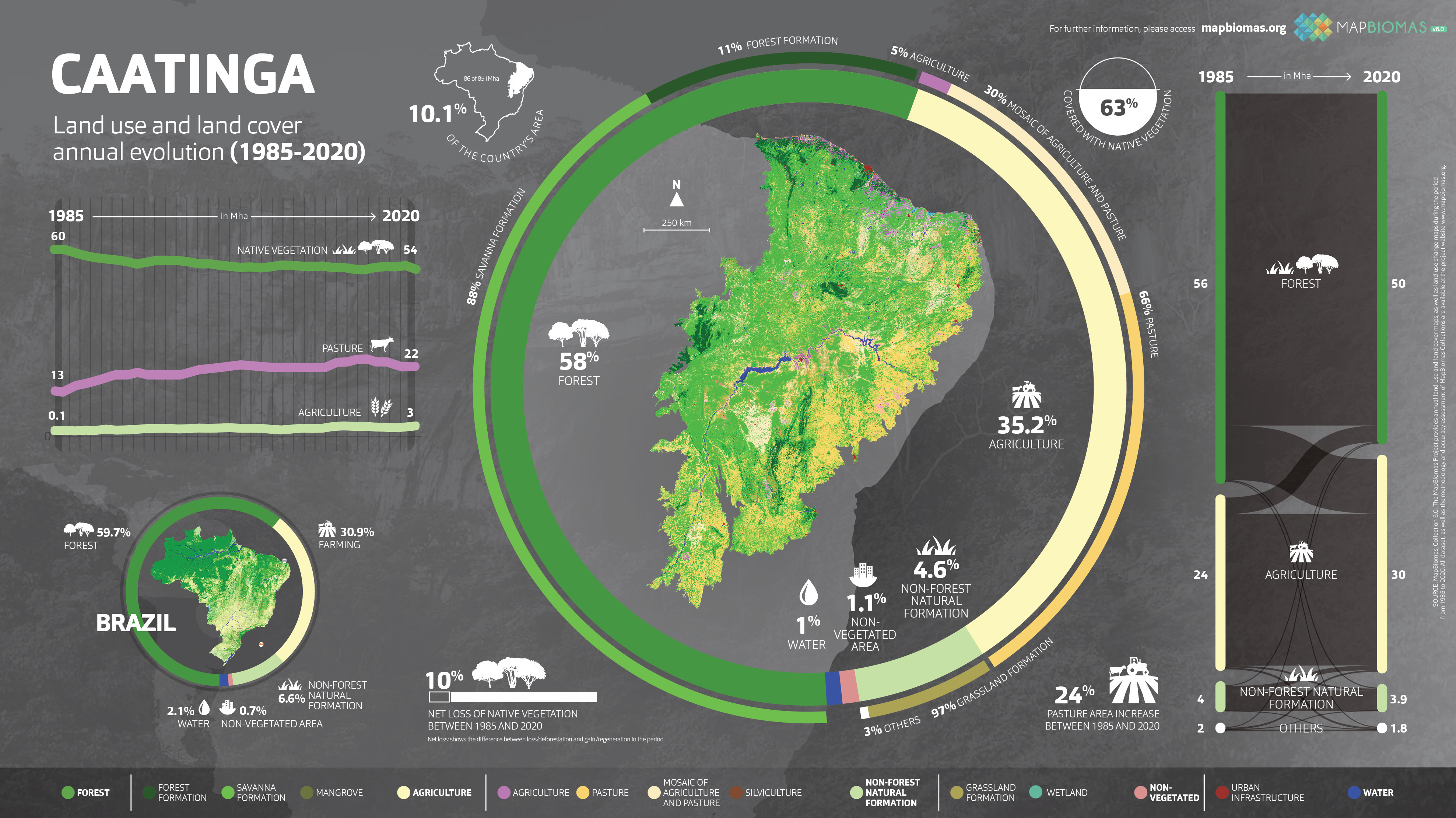 How the webinar with the Caatinga data presentation went.