Atlantic Forest: the challenge of halting deforestation in the biome where more than 70% of the Brazilian population lives

MapBiomas' unprecedented survey shows that important watersheds in the region have low forest cover, around only 20%.

A quarter of the Atlantic Forest forest cover is preserved. This unprecedented data was obtained by MapBiomas from the mapping of satellite images between 1985 and 2020 according to the contours determined by Law 11.428 of 2006, also known as the Atlantic Forest Law. With this, all the forest remnants of the biome, including parts of Piauí and Ceará, were analyzed. The 465,711 km2 remaining Atlantic Forest is found in 17 states (the continuous area extends over only 15 states). This and other data were released in a webinar on Wednesday (09/15).

The forest cover has remained practically stable over the last 30 years, after a period of high deforestation between 1985 and 1990.  Behind this stability, however, hides the loss of mature forests and the regeneration of young forests. Between 1985 and 2020 the loss of primary vegetation was 10 million hectares. In the same period, the area of secondary vegetation gained 9 million hectares. This loss can still be observed in certain regions of the biome, such as the araucaria forests in Paraná and in the north of Minas Gerais, on the border with Bahia.  The same process occurs in areas of natural grasslands, such as on the border between Santa Catarina and Rio Grande do Sul. Between 1985 and 2020, the loss of grassland formations was 28%.

"The apparent stability of the Atlantic Forest forest cover is misleading because there is a difference in quality between a mature forest, rich in biodiversity and with stored carbon, and an area in recovery," warns Marcos Rosa, technical coordinator of MapBiomas. Furthermore, an area abandoned for four or five years already has forest in its initial stage, but it is often deforested, preventing this forest from recovering. "We need to stop this trend of destroying mature forests and encourage the maintenance of recovered forests to ensure the environmental services provided by the biome," says Luís Fernando Guedes, coordinator of the Atlantic Forest and Pantanal team of MapBiomas. More than 70% of Brazilians live in the Atlantic Forest region, and they depend on the biome's environmental services to maintain air quality and supply water and energy. Encouraging the recovery of forests around rivers, springs and recharge areas of urban supply systems can reduce the water risk for this population.

A part of this process is already underway: satellite images show recovery in Areas of Permanent Preservation (APPs) around rivers, mainly in the interior of São Paulo and Paraná, where pasture was replaced by agriculture, such as sugar cane. "The pasture areas occupied even the river banks, favoring erosion and silting up of the waterways. With the substitution by agriculture, the APP on the edge of the rivers was respected and recovered - naturally or by planting native trees. This vegetation, especially around the springs, is fundamental for the quality and quantity of the water," explains Marcos.

"Planning Atlantic Forest forest recovery according to watersheds is a huge opportunity for public managers," Marcos points out. "As half of the Atlantic Forest native vegetation is in private areas, policies such as Payment for Environmental Services and the creation of corridors play a strategic role in the recovery and conservation of the biome," he adds.

Check out the main highlights of the Atlantic Forest here. 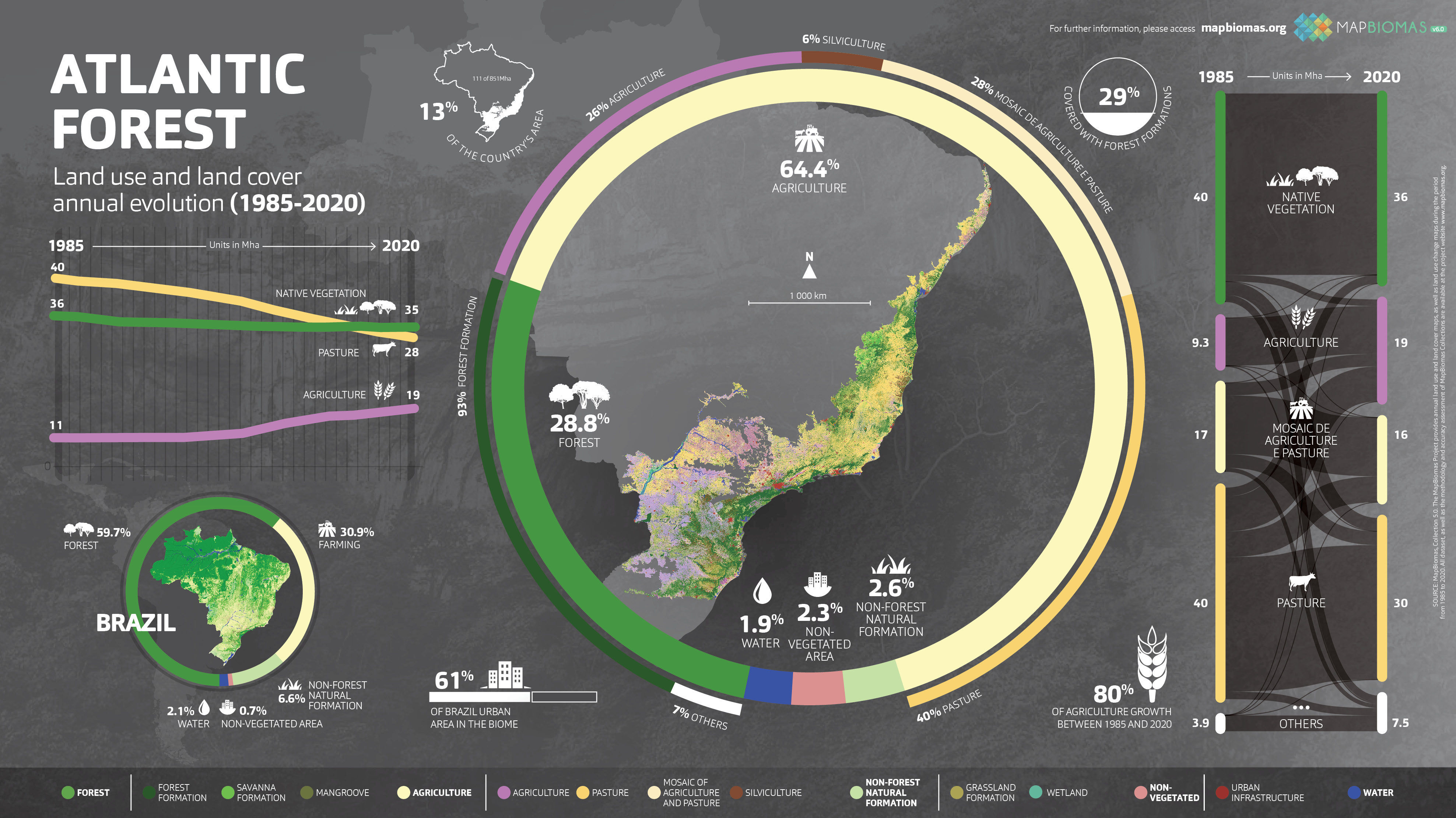 See how the webinar presenting the biome data from Collection 6 went: