Bahia increased fivefold the area for cultivation in 36 years and Piauí tripled the agricultural area since the end of the 1990s; Tocantins and Maranhão are the states that lost the most native vegetation in the last decade.

Matopiba, the Cerrado region that covers the states of Maranhão, Tocantins, Piauí, and Bahia, more than doubled the area dedicated to agriculture and cattle-raising in the last 36 years. In an increase of 258%, it went from 5.6 million hectares to 14.6 million hectares dedicated to the activity, an area larger than the state of Amapá. The data are from the new MapBiomas collection and went presented at a specific event for the biome on Friday (10), at the MapBiomas Brasil channel on YouTube.

Besides the numbers, the satellite images show the impacts of the intensification of deforestation and agricultural and cattle raising activities. Champion in the relative increase of the agricultural area in the Cerrado, Bahia increased this type of land use fivefold from 1985 to 2020. Piauí tripled the agricultural area in this stretch of the biome from the end of the 1990s. Tocantins suffered the greatest loss of native Cerrado vegetation in the last ten years (1.11 million hectares), followed by Maranhão (890 thousand ha).

"The data clearly show that there is an accelerated process of conversion of natural areas in Matopiba, as was previously observed in other Cerrado states," explains the scientific coordinator of MapBiomas, Julia Shimbo, a researcher at IPAM (Amazon Environmental Research Institute). If one considers the total loss of native vegetation since 1985, Mato Grosso is the champion, with 6.8 million ha, followed by Goiás, with 4 million ha, and Mato Grosso do Sul, with 3.4 million ha.

The Cerrado is the second largest biome in Brazil, with 198 million hectares, and presents different types of native vegetation. As a biodiversity hotspot, it is the most biodiverse savanna in the world and is under a high degree of threat. Almost half of it has already been deforested: 54.5% of its territory is still covered by native vegetation, 44% of which is in the Matopiba region.

One of the novelties of MapBiomas Collection 6 is the inclusion of a new class of Cerrado wetlands, such as humid fields, veredas, park savannas and wetlands, which represent 2.5% of the remnants. These environments have also suffered transformations: 582 thousand hectares have been suppressed since 1985, or 10.3% loss of wetlands. Of this converted area, 61% was destined for agriculture and cattle raising, especially pasture, and 32% became another type of vegetation, such as field, savannah and even forest.

A multi-institutional initiative that processes satellite images with artificial intelligence and high resolution technology in a collaborative network of experts, universities, NGOs, institutions and technology companies to create historical series and mapping of land use and land cover in Brazil. IPAM is the institution responsible for mapping the native vegetation in the Cerrado biome within the MapBiomas network.

Access the main highlights of Collection 6 from the Cerrado biome. 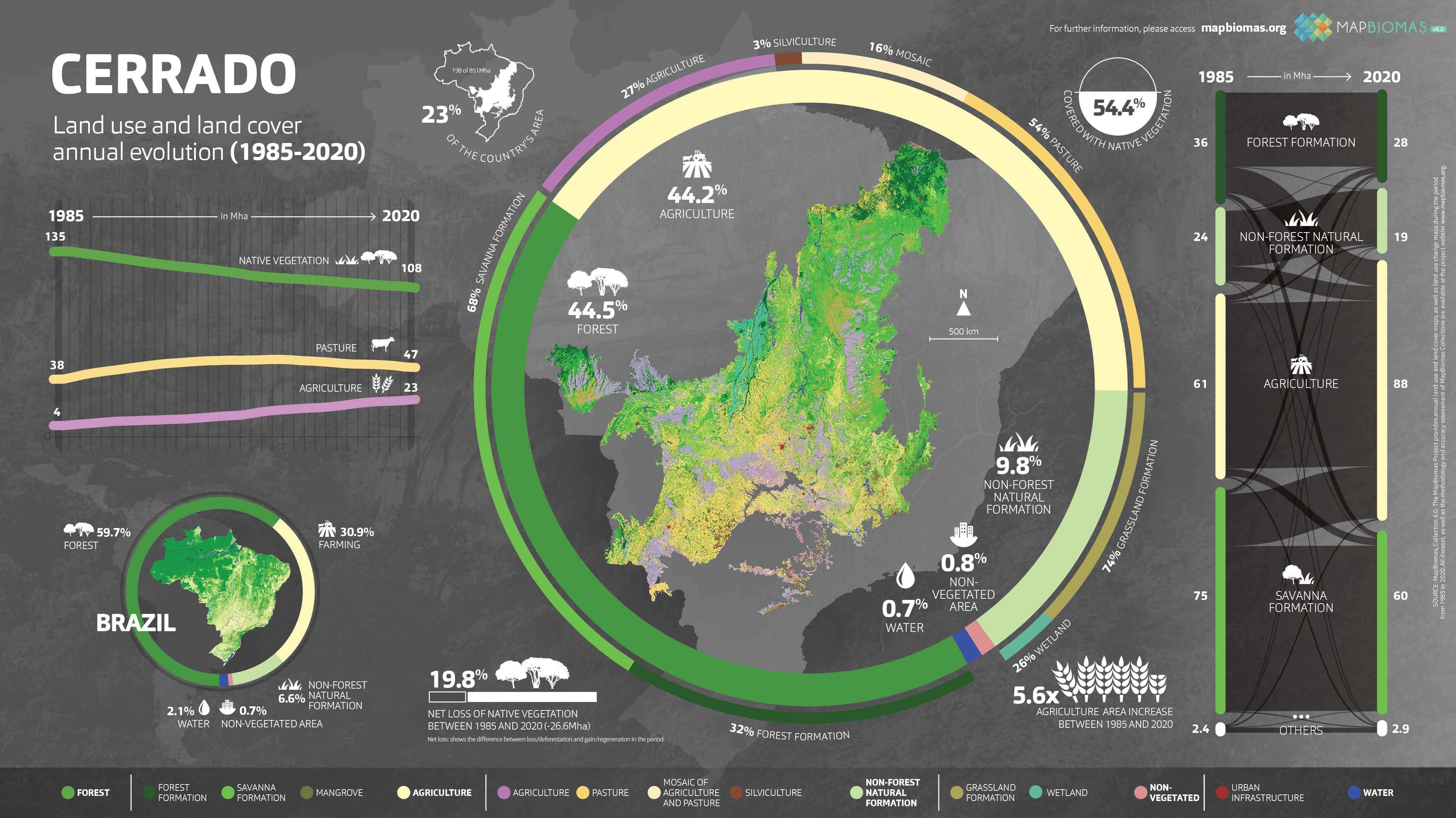 How the Cerrado data presentation went: